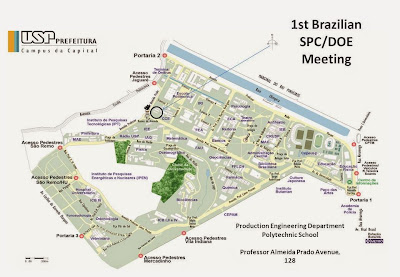 An Overview of Planning Experiments for Reliability Data
Speaker: Geoff Vining
Authors: Geoff Vining (Virginia Tech)
Abstract: The traditional approaches for the statistical design and analysis of experiments assume roughly normal distributions for the response (dependent variable). Reliability analyses, however, involve highly skewed and censored (the test stops before the process is complete) data, often modeled by distributions such as the Weibull. On the other hand, most reliability practitioners have little or no training in the statistical planning of experiments. These practitioners often have no basic understanding of such fundamental concepts as blocking, sub-sampling, and mixed models.  As a result, the two communities would benefit from more cross-fertilization. This talk presents a high level overview of the basic differences between the two communities. It then outlines some current and proposed statistical designs and analyses for reliability data.

Designs for selection in early stages of plant breeding
Speaker: Júlio S. de S. Bueno F.
Authors: Júlio S. de S. Bueno Filho (UFLA); Steven G. Gilmour (University of Southampton)
Abstract: In early stages of plant breeding design main restraints are associated with the number of replications (availability of biological material). It is also quite obvious that mixed effects models should be used to the analysis. Moreover, prior knowledge can be useful factor as there is not too much information coming from the actual experiment. However, all of this is ignored in actualresearch from plant breeding (academic research as well as commercial companies). We propose a framework to use prior information and build proper designs given the usual restraints. An example with sugarcane breeding is discussed.

Adaptive Control Chart for Linear Profile Monitoring
Speaker: Maysa S. de Magalhães
Authors: Maysa S. de Magalhães (ENCE/IBGE)1; Viviany L. Fernandes (UERJ); Francisco D. Moura Neto (UERJ)
Abstract: In some production processes the quality characteristics can be represented by profiles or linear functions. We propose adaptive control charts to monitor the coefficient vector of a simple linear regression model, once fixed parameter control charts are slow in detecting small to moderate shifts in the process parameters, that is, the intercept and the slope. A study on the performance of the proposed control charts was done, considering the average time until a signal.

Demands and paradigms of analysis in the agricultural market
Authors: Guilherme Moraes Ferraudo (Monsanto)
Speaker: Guilherme Moraes Ferraudo
Abstract: Monsanto is present over 60 countries and its history in Brazil begins on 1963 at São Paulo city. Currently, the company works to develop technologies that contribute to ally foods production, fibers and energy with environmental preservation. In Brazil, Monsanto have the following portfolio to deliver its solution to the sustainable agriculture (plant breeding, biotechnology and sustainable agronomic practices): (i) crop protection; (ii) seeds – soybean, corn, cotton, sorghum, vegetables and sugarcane.Next are presented some challenges that we are facing and we believe that the academics could be assisting us with its researches.1. Multivariate quality statistical control. What is the technique more appropriate to assess trials quality when we evaluate genetic materials performance (product development) in field?2. Design and analysis of agronomic systems trials. Agronomic systems trials present complexity to assess the system which is used by grower as a whole, at the same cultivation area: (i) crop; (ii) herbicide; (iii) winter/cover crops; and (iv) agronomic practices. Such peculiarities limit the application of the widely used models (ANOVA and multiple comparisons tests). What is the best way to analyze these peculiarities in long term trials, on that either management or previous crop makes influence on subsequent evaluations?
Postado por Comunicação PRO às 09:36 Nenhum comentário:

Industrial Statistics in Future Manufacturing
Authors: Murat Kulahci (TUD)
Speaker: Murat Kulahci
Abstract: The future manufacturing environment is becoming more complex and will generate vast amounts of high dimensional data with complex dependencies. The information embedded in this data could and should be used for process improvement studies. However multivariate statistical methods traditionally used in process improvement applications are usually inadequate to handle this type of data. New sensor technologies such as sound and image can be used for proactive interventions to ensure product quality and process stability. We expect a great deal of research opportunities in industrial statistics applications to take advantage of the abundance of sensory data. Some of these opportunities will be discussed during the presentation.

Livestock classification as resistant or susceptible to endoparasite infections
Authors: Marcus Alexandre Nunes (UFRN); Adriana Santana do Carmo; Cristiano Amancio Vieira Borges; Michel Marques Farah; Márcia Cristina de Azevedo Prata; Marco Antônio Machado;John Furlong; Wagner Arbe; Marcos Vinícius Gualberto Barbosa da Silva; Embrapa Gado de Leite
Speaker: Marcus Alexandre Nunes
Abstract: Infection by endoparasites have a huge impact on animal health. Cattle, for example, can lose weight or yield less milk if infected. However, while some animals are prone to be infected, other animals are naturally resistant to endoparasites infection. In this work, we are interested in classify dairy cattle in different groups according to their infection susceptibility. First, we assumed three different profiles for the infestation behaviour: naturally resistant, naturally susceptible, and acquired immunity. In order to identify which animal belongs to each group, we analyzed data from 376 F2 1/2 Gyr and 1/2 Holstein animals, whose infections were recorded during 28 weeks. We used a clustering method called KmL, capable of identifying different clusters in longitudinal data, in order to identify how many clusters are needed to partition the original data into meaningful groups. Our findings show that only the resistant and susceptible groups need to be considered. We also compare the results of different generalized linear models fitted to the data.

CUSUM Control charts to monitor series of Negative Binomial count data
Authors: Airlane Pereira Alencar (IME-USP), Linda Lee Ho (EPUSP), Orlando Yesid Esparza Albarracin (IME-USP)
Speaker: Airlane Alencar
Abstract: To detect outbreaks of diseases in public health, several control charts have been proposed in the literature. In this context, the usual generalized linear model may be fitted for counts under a Negative Binomial distribution with a logarithm link function and the population size included as offset to model hospitalization rates. Different statistics are used to build CUSUM control charts to monitor daily hospitalizations and their performances are compared in simulation studies. The main contribution of the current paper is to consider different statistics based on transformations and deviance residual to build control charts to monitor counts with seasonality effects and evaluate all the assumptions of the monitored statistics. The monitoring of daily number of hospital admissions due to respiratory diseases for people aged over 65years old in the city São Paulo-Brazil is considered as an illustration of the current proposal.

Double generalized linear model from a Bayesian perspective applied to designed experiments
Authors: Afranio Vieira (UFSCar)
Speaker: Afranio Vieira
Abstract: Joint generalized linear models and double generalized linear models (DGLMs) were designed to model outcomes for which the variability can be explained using factors and/or covariates. When such factors operate, the usual normal regression models, which inherently exhibit constant variance, will under-represent variation in the data and hence may lead to erroneous inferences. For count and proportion data, such noise factors can generate a so-called overdispersion effect, and the use of binomial and Poisson models underestimates the variability and, consequently, incorrectly indicate significant effects. In this work, we propose a DGLM from a Bayesian perspective, focusing on the case of proportion data, where the overdispersion can be modeled using a random effect that depends on some noise factors. The posterior joint density function was sampled using Monte Carlo Markov Chain algorithms, allowing inferences over the model parameters. An application to a data set under experimental design is presented, and a comparison with frequentist for which it is shown that the Bayesian approach is quite feasible, even when limited prior information is available.
Postado por Comunicação PRO às 09:36 Nenhum comentário:

Modified Control Charts for Processes with Complex Autocorrelation Structures
Authors: Renato Tigre Martins da Costa (UFRN), André Luís Santos de Pinho (UFRN), Carla Almeida Vivacqua (UFRN), Linda Lee Ho (USP)
Speaker: André Pinho
Abstract: This work proposes a modified control chart incorporating concepts of time series analysis. Specifically, we considerer Gaussian mixed transition distribution (GMTD) models. The GMTD models are a more general class than the autorregressive (AR) family, in the sense that the autocorrelated processes may present flat stretches, bursts or outliers. In this scenario traditional Shewhart charts are no longer appropriate tools to monitoring such processes. Therefore, Vasilopoulos and Stamboulis (1978) proposed a modified version of those charts, considering    proper control limits based on autocorrelated processes. In order to evaluate the efficiency of the proposed technique a comparison with a traditional Shewhart chart (which ignores the    autocorrelation structure of the process), a AR(1) Shewhart control chart and a GMTD Shewhart control chart was made. The criteria used to measure the efficiency were the ARL0 and ARL1. The comparison was made based on a series generated according to a GMTD model. The preliminary results point to the direction that the modified Shewhart GMTD charts have a better performance than the AR(1) Shewhart.

Optimization of pultrusion process parameters via design of experiments and response surface
Authors: Antonio Faria Neto (UNESP); Antonio Fernando Branco Costa (UNESP)
Speaker: Antonio Faria Neto
Abstract: Experimental designs were implemented to investigate the effects of mold temperature and pulling speed on the tensile strength of cylindrical cables produced by pultrusion. A two-level factorial design with a central point revealed that the linear model is not applicable for describing the pultrusion process parameters’ influence on the tensile strength. Additional experiments were performed to investigate the contribution of quadratic terms. A three-level factorial design revealed that the simplest model with the highest performance has three terms, the linear components of the main effects and the quadratic component of the temperature. In the investigated range of the parameters, the tensile strength always increases with the mold temperature and decreases with the pulling speed. Thus, cables produced at the highest temperature and the lowest speed are the most resistant. Compared with the mold temperature, the pulling speed has a minor influence on the tensile strength. Based on this finding, during periods of higher demand, the pulling speed can be increased without significant loss in tensile strength. The gain in quality translated into cables with better resistance, which highly compensates for the additional energy consumption.
Postado por Comunicação PRO às 12:35 Nenhum comentário: